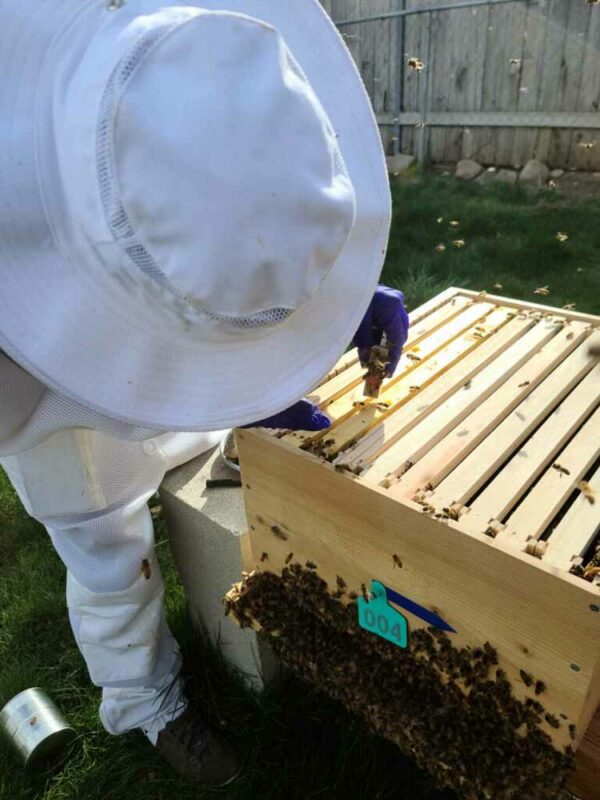 Queens: How To Introduce A New Mated Queen To A Colony.

You have a new queen in a package, or you bought mated in a cage. How do you introduce her to her new colony? Queens need to start laying eggs as soon as possible. We prefer immediate release for all our naturally mated queens and push-in cages for all inseminated queens. It’s unlikely that a direct release queen will be aggressively balled up if done correctly; according to a study done by G.E. Robinson, 0.5%-2% of the colonies’ workers behaved aggressively(Worker and Queen Honey Bee Behavior During Foreign Queen Introduction). Keep in mind that the most aggressive workers are older forager honey bees; this means in a colony of majority nurse bees (like when a split is done in the same apairy and the forager bees return to their original colony). These aggressive worker bees are nearly absent.

When situations are prime(as we will discuss later – like waiting 48 hours after queenless before introducing a new queen), more research is needed, but it stands to reason that poorly mated queens are more likely the cause of the aggression – or a genetic defect – such as a high percentage of drones attributing to inbreeding (after a queenless period of 48 hours). A queenless hive will not kill a queen for no good reason; it’s in their best interest to keep her. They will only kill her if the queen threatens their survivability due to disease, unfertile, or inbreeding 0r if they still have a queen or have not been queenless for very long, or if they are a drone-laying colony (since they think they have a queen).

One study said this on the subject “Currently, the majority of queens in the US are produced by relatively few commercial queen producers [203], which raises concerns about a lack of genetic diversity and the spread of certain diseases [141,203], particularly those that are transmitted vertically…”(Queen Quality And The Impact Of Honey Bee Diseases On Queen Health…)

This research is supported in multiple studies as identified by Sue W. Cobey “The authors suggest a relationship between pheromone level, queen acceptance and survival success…”(Comparison studies of instrumentally inseminated and naturally mated honey bee queens and factors affecting their performance)

In the same article, although the direct release was used with Instrumental Inseminated Queens – it supports the idea that direct release is beneficial to queen production: “Woyke (1989b) also reported that IIQs restricted to small push-in cages made of excluder material stored 1.8 million sperm cells, compared to 5.2 million sperm cells stored by IIQs allowed free movement and released directly after insemination…”

Survivability is also attributed to breeding practice – the standard practice is to sell a queen bee between 14 and 21 days of age – which increases queen turnover but decreases acceptance. (Queen honey bee introduction and early survival – effects of queen age at introduction). In the research, queens were introduced by the standard candy method. This suggests that queen acceptance has more to do with not how you introduce the queen but breeder management practices and good mating. Also, a queen’s acceptance does not mean she will not be superseded shortly after laying.

So, why are we suggesting direct release over the standard cage release? Faster queen laying. That’s the main benefit of direct release; you get the queen to start laying right away.

How Do You Do A Direct Release?

In ALL cases of direct release, you want to wait 48 hours of queenlessness before introducing their new queen. If that’s not possible, then the standard cage release will be the best option.

If you want high direct release acceptance, go with the smoke method. You can do this in nearly any situation, whether its an established queenless hive (with lots of forager bees, or a hive with mostly nurse bees). Here is the method that was outlined in a research article:

“In this method considerably more smoke was given than is needed to make a hive inspection. First, three or four puffs of smoke were blown into the entrance. The hive was then opened, and 6–7 more puffs were blown onto the tops of the frames. This caused many of the workers to leave the frames and congregate on the bottom board and even to start walking out of the entrance. The virgin queen was then introduced. She was first held gently in the fingers and then placed in the gap between the top bars of two adjacent frames. A few seconds after being released, 4–6 more puffs of smoke were blown into the open hive. After the queen had disappeared between the combs, the hive was closed. Finally, 5–6 more puffs of smoke were blown into the entrance.” (Direct introduction of mated and virgin queens using smoke: a method that gives almost 100% acceptance when hives have been queenless for two days or more)

We ran a small test with 44 packaged colonies, 22 were direct release and 22 were standard candy caged – we did not see any statistical significance over acceptance by either direct release or caged. This is most likely due to the fact the packages are with the new queen for a while and at this point already familiar with her scent. So, we just direct released her in between the frames of her new hive after all the honey bees were put in, and we did this with no smoke used in this test. But, looking at the research article, you may add a few puffs of smoke just for good measure.

It’s advised to remove all attendant bees if they accompanied the queen in her cage. Some breeders keep attendant honey bees inside the cage with her to extend shipping times. If this is the case, remove all attendant bees from the cage. One research article noted that attendant bees present increased the aggression and balling behavior time period so that by the time the queen is released in some cases there is still aggression present. (Aggression Patterns of Worker Honey Bees Towards a Foreign Queen…). With this being said, we have not personally seen any issue with leaving the attendants inside the cages during cage release as long as the candy used during cage release is harder and will take longer to release her.

Regarding cage release, if you use foundationless frames, you should always use a direct release method or use already drawn frames.  With candy cage release, they often start cross combing and building comb from off the cage.

Our suggestion for queen release is direct release; if you don’t feel comfortable with that, push-in cage release is much better than candy cage release since you have the queen laying right away.