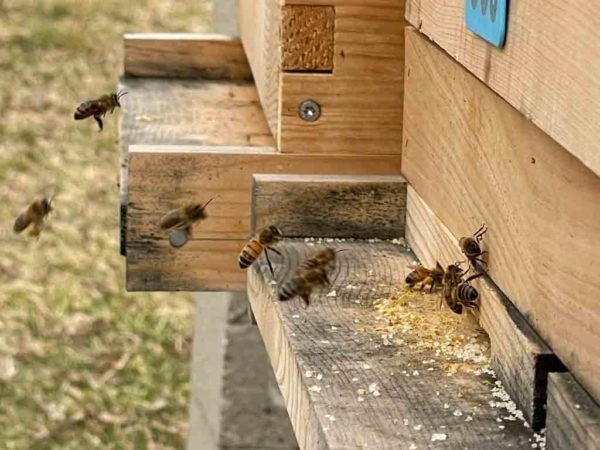 In today’s article, we will discuss the Robbing Behavior in honey bees. Surprisingly, there is not a lot of research that has been done on this behavior, apart from years of beekeeper observations.

In short, ‘Robbing’ is where a scout honey bee enters a colony that is not her own, takes food (in nearly all cases, its honey, nectar, or sugar syrup), and returns to her hive and recruits unemployed older honey bees.

Unemployed older honey bees are, in most cases, over three weeks of age and, due to a deficiency in foraging activity compared to the size of the colony, are looking for work to do outside the colony.

The result can be hundreds or thousands of honey bees from another colony taking the resources of a foreign colony.

To an untraining beekeeper, this may look like a good day for the hive since there is ‘a lot’ of activity near the entrance. But an experienced beekeeper will know what ‘normal’ traffic looks like and notice about double or more honey bees that seem frantic and much more energetic than unusual.

When robbing starts, the defenses have already been broken, and that hive will not recover (without beekeeper intervention), until most or all the carbohydrates are depleted from the hive.

Robbing behavior is normal biological behavior for honey bees, it helps equalize colonies, and instead of honey rotting in a dead hive, another colony will take it for their own survival – and if there were any diseases that killed the colony, the honey bees will bring that back to adapt to its effects.

This behavior is escalated in a managed apiary where there may be dozens of hives in one area. From a linear equation, we can think of robbing as (scouts > guards = robbing). Of course, this is an oversimplification, but I believe it to be reasonably accurate.

Honey bees will not enter other colonies that are well guarded. They will test it out, perhaps, but will quickly move on to other sources.

And when a honey bee leaves her colony and within a matter of seconds, smells the overwhelming odor of fresh honey or sugar syrup, and goes to explore to find it nor guarded. This is a great opportunity for her and her colony. The only time in nature she would find a colony with a large number of resources and low to zero honey bee defenses is in a dead out.

Honey bees have 170 odorant receptors, and it is been said they have a better sense of smell, many times great than that of dogs. So, when a beekeeper leaves sugar syrup out or honey or has a large amount of syrup in a small NUC – it is not going to be long for that scout to detect that and inform her hive mates. (Honey bees have a much better sense of smell than fruit flies or mosquitoes, but a much worse sense of taste, according to researchers at the University of Illinois at Urbana-Champaign.)

What can you do to halt robbing?

What if robbing has already started?

There is very little you can do in this case, unfortunately. The best thing to do is avoid Robbing completely; keeping weak hives away from strong hives will be the best option. Remember our equation, scouts > guards = Robbing. If you have a strong hive with five scouts and a weak hive with two guards – robbing is highly likely. It is not necessary that simple, but you get the idea.

But, here are a few suggestions.

Some beekeepers turn on a sprinkler that hits the hive for 15 minutes to ward off honey bees, but many times those honey bees come right back after you turn off the water.

You can reduce the entrance even further, perhaps even taking screen mesh and completely blocking the entrance. This does not really help either, since foreign honey bees are still trapped inside, and once they leave will still come back later, perhaps with more help.

You can only do two things: wait for the robbing to stop (when all food from that hive is emptied) and then afterward assess the damage and make changes as needed, or close up the hive and move it over a mile away. All other items of intervention are negligible at best.

Once robbing starts, there is very little you can do to stop it, and even after all the food is gone, scouts will still come back during the next few days or weeks to make sure – so again, if that hive has still not recoved and assigned more guard honey bees – it may turn into chronic robbing – where the scouts ‘remember’ where food sources are at – so if you change little and just give them more food, robbing most of the time starts back again.

The best thing you can do is keep equal colony hives in the same yards. NUCS with NUCS, DEEPS with DEEPS, mini-nucs with mini-nucs, and so on. This halts the majority of robbing. Keeping these yards at least a mile away or more from each other.

Also, if you are doing splits in times of dearth, you need to make sure any adult honey bees adjust to their new hive location, or they will head right back to their original hive (if you kept the split in the same apiary) and leave the new split without adult honey bees and little to no guard bees. So, understanding how to do a split correctly will also help in this case.