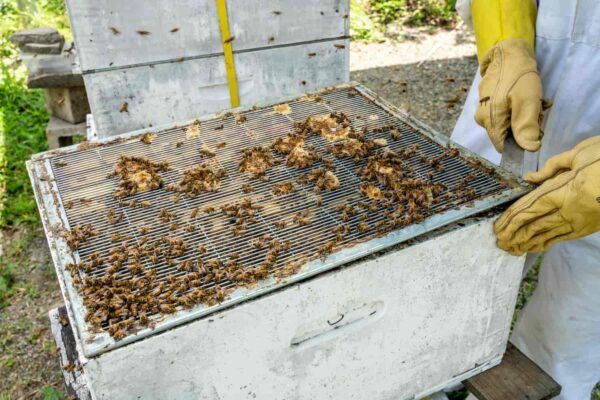 It has been about a year since we published this article initially, and I figured it was time for an update to the information we posted. 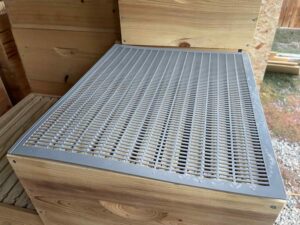 As the name suggests, a queen excluder’s primary purpose is to exclude the queen from entering or exiting a part of the hive. This could be used for breeding or separating the queen from the supers(where the honey is stored).

Some use the term ‘honey excluder” to refer to the queen excluder. It’s not a popular option with most commercial operations, even though they come in most beginning beekeeping kits.

It’s important to know that not all ‘bee equipment’ should be used; the queen excluder, for many purposes, falls into this category.

“The queen excluder is probably the most misunderstood and abused piece of bee equipment in use.”
Dewey M. Caron(Honey Bee Biology: page 243)

In most cases, if you are not sure what they are used for, you should probably not be using them. They are primarily used in breeding operations and single brood management systems. It’s important to note that both queens and drones will not be able to pass through the queen excluder. If they do pass through, your queen excluder has a crack in it, or the metal is bent. So be careful with prying them off with your hive tool.

Like most of our articles, we try to look at not opinion or preference but look at the data and science if it’s available and make educated decisions based on that data. Using a queen excluder is no different. The problem is, that there is not much research that has been done on the effects of queen excluders, but we did find two research articles that touched on the use of queen excluders.

It had this to say:

Now, this study was conducted on A. m. scutellata (African Honey Bee) instead of the more popular A. m. ligustica (Italian Honey Bee) – but they are both part of the same species Apis Mellifera, so a comparison is appropriate. The brood production, though, is much different for both species, and the A.m. scutellata has about 50% more brood than A.m lugustica.

I thought the final results were interesting as the article mentions: “The negative and weak correlation detected between the brood population and honey yield at honey harvest indicates that the existence of a large
brood population at peak honey flow has no positive effect on the
honey yields of the colonies. This result is consistent with the findings
of Szabo and Lefkovitch (1989), who reported an absence of a significant correlation between honey production and brood populations reared
late during a peak honey flow period. Moreover, Nolan (1925) stated
that the quantity of nectar gathered by a colony depends not only on
the total number of bees in the colony during a honey flow but also
on the relative number of nectar foragers.”

The article’s final thought was compelling:

“Based on the findings of this study, it is evident that the use of
queen excluders may improve the honey yields of colonies that show
strong and continuous brood-rearing tendencies, and this indicate that
the amount of honey that can be saved from larval consumption due
to reducing brood-rearing activities during peak honey flow periods is
significant. Therefore, the partial limiting of queen’s egg laying using
queen excluders for short periods (during peak honey flow) would
improve the honey yields of honey bee colonies by maintaining a
balance in resource allocation between brood rearing and honey storage.
However, if the queen excluder is inserted before the colonies have
attained a sufficient work force, it may affect the honey yield; similarly,
if the insertion is delayed to near the end of the honey flow, it is
unlikely to contribute the honey yield of the colony. Careful determination
of the appropriate timing for inserting queen excluders, based on the
brood populations and the flowering patterns in a given area, is of
paramount importance.”

So balance is needed, and good management practice is required if you are using a queen excluder.

The only other article I could find that did some research on the subject was from Bee Informed Partnership titled “Beekeeping Equipment: Excluders!“.

In 2014 they published an article that did a small test using queen excluders on 40 hives and expressed a correlation to swarming for a hive that had a queen excluder on them the whole time.

As a final thought of queen excluders, it is important to understand that they have a limited timetable and are not kept on throughout the whole year. Only during breeding practices – with understood biological consequences, and only when supers are on for the purpose of gathering excess resources from a honey flow – recommended only when running single brood chambers.

Whether you use one or not is not the point of this article, but rather to provide some information for the management of your honey bees. As with any piece of bee equipment, understanding the when, why, and how is vital for success.