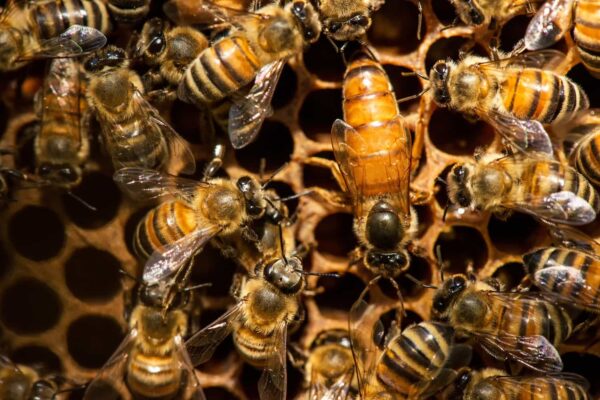 In today’s article, we will focus our attention on some basic aspects of the queen honey bee. The two major items that separate a queen from other castes (workers and drones) are life span and fertilized egg laying.

Queens typically mate with 12 to 20 drones in one or multiple mating flights, and she will store six to seven million spermatozoa. Interestingly, only about 3-5% of the sperm obtained during mating are actually retained in the spermatheca. (Koeniger and Koeniger 2000). Within that 3-5% is a cocktail of all the drones she mated with; this increases hive diversity and survivability. The nuptial flights and the biology thereof will be discussed in other articles.

Most of the time, there is only one queen per colony; there are exceptions during swarming preparations, supersedure, or emergency queen replacement. (Dual Queen in a Colony of Honey Bees)

There is only one active mated queen in a hive, but supposably there are infrequent occurrences of a daughter queen that is mated and laying eggs next to an older soon-to-die mother queen – but no reference work I could find proves this true. I can say that it is not rare as some think to find a virgin living in a hive with her mated queen mother; there had been more than one occurrence where I removed a queen and a week later came back and found a mated queen in the same hive.

Queens and workers come from the same fertilized egg; the only thing to separate the two is what they are fed and the size of their cells. They can be biologically identical at egg laying and in the first three days as larvae; after this time, their food diverges. A larva destined to be a queen is fed Royal Jelly continuously for the rest of her life (as well as a larger cell called a queen cell), and a worker around age three larvae is transitioned to worker jelly, later to brood food, and later to mostly honey or nectar.

Queens can lay eggs at a rate as high as 1500 or more eggs per day. A queen is taken care of by your ‘royal’ attendants that feed her, groom her, and even remove her excrement for her. At any time, the queen can release a pheromone that ‘summons’ nearby nurse’s bees at the appropriate age, and she will convert her role into a royal attendant.

She is thoroughly cared for at all times of the day, 24/7. Of course, this is not a life of privilege; during the primary season, she will continuously lay eggs 24/7, with short naps approximately every 15 minutes.

The only time she leaves the hive is during the mating flight when she was a virgin, and she will never mate again, and when the hive swarms. Otherwise, her home can be home to around 40,000 of her daughters from different fathers and her sons (drones), usually a few hundred in the hive during the swarm season. Her sons are all clones with 16 chromosomes, and they have no father, only a grandfather (their mother’s father).

The queen is not the master of the colony; other than her pheromones playing some crucial roles (which we will discuss in other articles), the colony collectively makes choices as a superorganism, which include when to swarm, where to live, when to replace to the queen and many other decisions.

When the colony decides to replace the queen, which is supersedure, the queen will be obediently submissive and lay her replacement daughter. The queen’s role is to serve and she does so with exceptional grace.