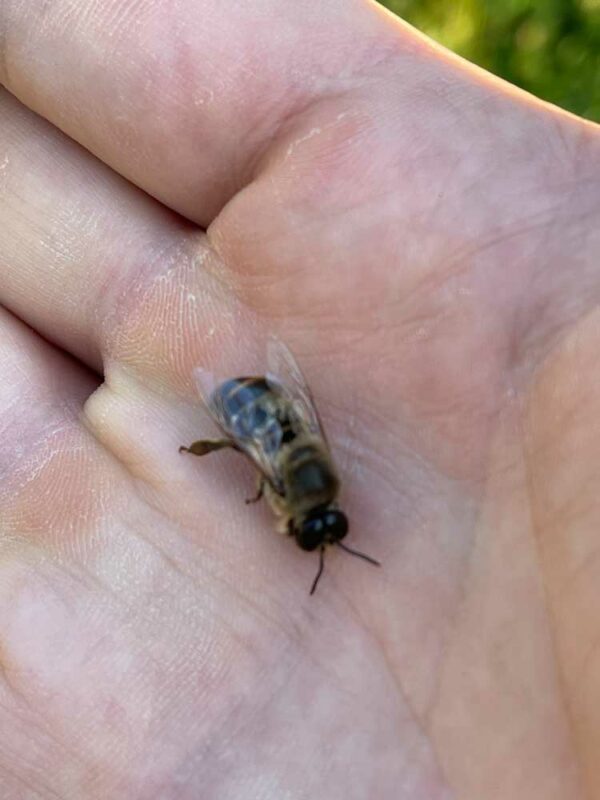 Over time, the drone has a bad reputation for being worthless and a drag on the colony. As a result, many beekeepers keep drone production limited by adding only worker pre-stamped foundation to a hive. Unfortunately, this is still popular in beekeeping, and it is unfortunate because the drone has a significant role in the colony that can be easy to overlook.

Let us learn a bit about the biology of the drone.

Drones are the male castes of the hive. They can be identified by their enormous compound eyes and a thicker abdomen. Unlike the females, they have no stinger, and they live for approximately 55 days or about eight weeks.

At first glance, the drone looks like it has two jobs, eat and mate. They have no assigned tasks within the hive; they just eat honey and fly to the drone congregation area to wait for a virgin queen. They get kicked out of the hive in the fall when food gathering decreases, and they are produced more rapidly in the spring and summer.

This is where most beekeepers stop in their knowledge of drones and at this point. Why would you want drones in your colony? They just eat up the precious honey, and it seems like the female workers don’t like them because they just get kicked outside as soon as winter approaches.

Before we take this approach, let’s take a deep dive into understanding the importance of drones.

If you have a strong colony – you are doing your area proud by allowing a good supply of drones to be available to mate. One article mentions: “factors affecting drone health and reproductive competency may directly affect queen fitness and longevity, having great implications at the colony level…”. The same article says” More attention needs to be paid not only to the factors that affect the reproductive quality of queens but also their mates, given that drones confer important contributions to the longevity of queens and the genetic diversity of the colony (Amiri et al. 2017).” (Factors affecting the reproductive health of honey bee(Apis mellifera) drones – a review)

So this provides our first reason why we need to care for our drones and allow a colony to rear them. Biologically, the honey bees want to rear drones. When a colony that is given all pre-stamped worker foundation is then given space to draw their own comb – they will nearly always – draw drone comb. If it is crucial to the honey bees, it should be important to us.

More important than that, good-quality drones are necessary for neighboring colonies, both feral and managed. We are doing a good service by allowing good quality drones to be in the hives.

To this same point, another article writes “Colonies headed by queens inseminated with 30 or 60 drones produced more brood per bee and had a lower proportion of samples positive for Varroa destructor mites than colonies whose queens were inseminated with 15 drones, suggesting benefits of polyandry at rates higher than those normally obtaining in nature” (Honey Bee Colonies Headed by Hyperpolyandrous Queens Have Improved Brood Rearing Efficiency and Lower Infestation Rates of Parasitic Varroa Mites)

Unfortunately, the drone has not been studied as extensively as the other castes. But we can say that the drone plays a crucial role within the hive. One of the key tools we have to assist diseases and pests is strong genetics. The key pillar to this is drones.

So hopefully, this article gave you a pause to reflect on the importance of the drone from a biological perspective. Yes, they eat more honey than not having drones (the effect of drone comb on a honey bee colonies production of honey)

But knowing how vital honey reserves are to our honey bees, the very fact that they allow the drone to consume it, does that not give us pause to think why? If the colony will give up its precious resource to the drone, perhaps it’s more important to them than we think?