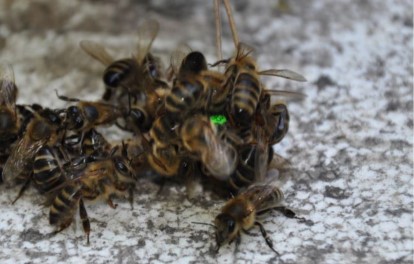 Queen Balling Behavior: The How and Why

There is an interesting behavior that worker bees (usually 12 days or older) do on mated queens or virgin queens called balling. If you have ever seen a group of worker bees ball a queen, it can be shocking, especially if you have just bought the queen. This article will talk about this behavior in-depth to see what it is and what it means.

Balling is a behavior that is not just isolated to a foreign queen introduction. One research work which was focusing on studying balling behavior from mating flights noted: “The reasons for queen losses were balling, not returning from mating flights, drifting and not flying until the end of the observation (therefore not mated) (Fig. 2). Bees balled forty-one queens, 15.2% of the total. The majority of queens were attacked at the entrance before entering the nuclei…”

At the end of their experiments, they noted that “Total queens losses during natural mating reached 30.2% (Fig. 2), and about a third of these was caused by balling. Some queens were saved but only because they were caged when attacked by bees, but if they had been left with bees and not caged, the losses would probably have been higher…”

The study also noted that subspecies have similar balling behavior, and there was no confirmation that one subspecies ball more queens than others. They did note that “More queens were balled in the spring than in the summer, but it was not connected with the amount of nectar income, regardless the research year…”

Their study suggested that older worker bees were not confirmed as balling more than younger bees. Yet, the researchers noted that most of the balling were done before entering the hive when returning from mating flights, in which nearly all the honey bees at the entrance are all order honey bees.

Unfortunately, the research article concluded, “Despite laborious research, no clear reasons could be indicated for the balling of queens that returned from mating flights by workers from the same colony, and only some factors were excluded…” So, it’s still a mystery why queens returning from mating flights are balled. One high possibility is poor mating or breeding. (BALLING BEHAVIOR OF WORKERS TOWARD HONEY BEE QUEENS RETURNING FROM MATING FLIGHTS)

It was also noted that “It seems more likely that workers attack queens when alarm pheromones releases. Workers’ pheromones secreted from Koshevnikov glands signaled the balling (Lensky et al., 1991)…” This is why when direct releasing a queen into a hive, using smoke may improve acceptance. (Queens: How To Introduce A New Mated Queen To A Colony).

Another research article studying queenless swarms and their behavior toward their own queen and a foreign queen had some interesting observations, which may be helpful when introducing new queens to hives : “Worker bees entering a cage containing their own queen ‘inspected’ her thoroughly by stroking her with their antennae and by licking the queen’s entire body, especially the abdomen. These workers appeared to become increasingly excited while inspecting the queen. Some workers fed the queen or left the cage and, while standing on or near the cage, dispersed Nassanoff pheromone by fanning their wings over their exposed scent glands. Vigorous scent-fanning usually began after several bees had fed the queen and after 20-50 bees had arrived at the cage. Workers finding a foreign queen also ‘inspected’ her thoroughly. Some feeding and scent-fanning occurred initially. However, almost invariably, as soon as 20-50 workers were present in or on the cage, one or two of them suddenly clamped their mandibles onto a leg, wing, antenna or mouthpart of the queen. Other bees would then also clamp onto the queen or onto the screen of the cage; some workers protruded their sting and flexed their abdomen as if trying to sting the queen. However, no queens were killed by the workers. More bees entered the cage and the foreign queen was then pushed into a corner; she was physically immobilized by a ‘ball’ of workers tightly clustered on and around her. At this stage, all scent fanning behavior by bees outside the cage ceased…” (Discrimination of Familiar and Foreign Queens by Honey Bee Swarms)

I thought it was interesting that at first, both responded somewhat similarly to both queens, feeding, and scent-fanning (which shows that those by themselves do not mean a queen will be accepted), but when 20-50 workers arrived at a foreign queen, things got aggressive quickly, but at first 1 or 2 bees and then more joining as time went on in balling behavior.

Another article by Robinson, G.E in 1984 titled “Worker and queen honey bee behavior during foreign queen introduction” mentioned that balling may be elicited by the behavior of the queen. Some foreign queens are more dominant and are more likely to be accepted than passive queens. In contrast, some foreign queens emit a ‘stress pheromone” that elicits worker balling behavior.

Robinson’s study also noticed that 0.5-2% of the colony initiated the balling process and continued to display aggression for many hours. Most of the workers in a ball were 12 days older or older. (Worker and queen honey bee behavior during foreign queen introduction)

Queen balling is normal behavior that is initiated by a few of the workers in an attempt to test their fitness if pheromone production or queen quality is not up to standards. It may be that acceptance of a queen (both foreign and returning from mating flights) depends on the perceived quality of the queen or through balling. This may be a way to ‘test’ the quality of a queen if other factors are not met, or if the perceived quality clearly identifies a poorly mated, or imbreed queen.

With balling, the honey bee colony will be the one to decide whether a queen is ‘up to standards’, not the beekeeper. This may, with further research, point to the importance of direct releasing queens – to allow the honey bees to make the final choice. A study outlining the long term effects of cage release queens vs. direct release queens and studying longevity, hive production rates, honey surplus, and other factors may be needed to see whether it is in the beekeeper’s best financial interest to allow the honey bees to decide on the superior quality of the queen or if the beekeeper should make the final choice.