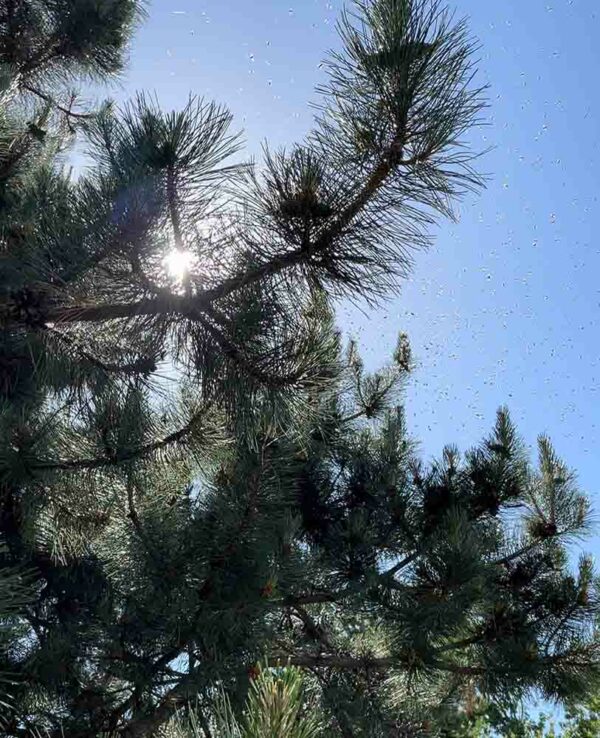 On warm sunny days, in the afternoon, on average between 2PM MST – 6PM MST, drones and virgins will take a flight to copulate. So, the weather has to be just right. Once a drone congregation area is established (which is still not fully understood how this happens and how drones ‘setup’ these DCA’s), these areas will persist year after year, whether a virgin arrives or not.

According to Ruttner and Futtner 1972, when strange colonies were introduced in the area, on the first day they were found at drone congregation areas, both near and distant. Drones can show up at a local DCA within 10 minutes of arriving in a new location. How this is done is not yet fully understood. Pheromones are most likely the way drones are able to find their way to DCA’s.

To decrease inbreeding between drones/virgins within the same colony, a study in Austria showed that virgin queens tend to visit farther DCA’s compared with Drones from the same area.

When a virgin queen enters a drone congregation area (or even at times in a flyway area) a comet-like formation will appear, normally after the first drone mates with the queen. The mating sign will attract more drones and those drones will try and chase her down, forming a comet-like appearance.

Congregation areas are highly variable, about 100 feet by 600 feet wide and 50 feet to 120 feet high. If you find an area with a lot of dead drones on the ground…you most likely are under a drone congregation area. So far, research has not shown precisely how drones/virgins know where DCA’s are at. Researchers can identify these areas by using a virgin queen in a cage tied to a helium balloon. A very time-consuming endeavor!

Graham Kingham in his book “Honey Bee Drones – Specialists in the Field” mentions: “Bee scientists, however, have produced differing results in describing congregation sites where drones gather and virgin queens attend for mating to take place, or even agreeing whether DCA’s actually, or at least uniformly, exist.”

DCA’s are fascinating because with much research being done with honey bees, we still don’t have a clear picture of these areas. As you will find, there is still a lot to learn, and sometimes even previous ‘facts’ are being corrected with new information when it comes to honey bees.