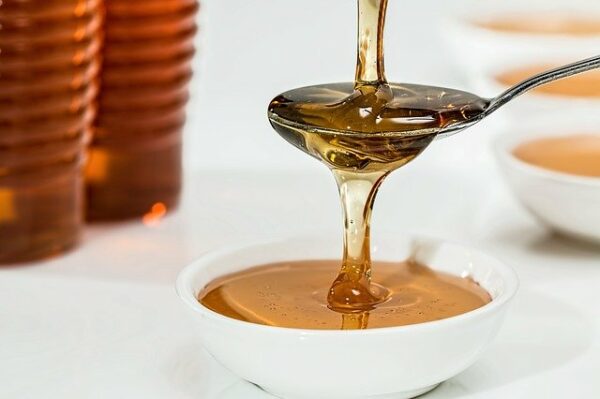 This is a controversial topic with strong opinions on both sides. So, in writing this article, I wanted to stick with the scientific facts and industry-wide definitions to make sure this question is answered correctly.

The USDA defines Honey as: “Honey is a sweet, syrupy substance produced by honey bees from the nectar of plants or from secretions of living parts of plants or excretions of plant-sucking insects on the living part of plants, which the bees collect, transform by combining with specified substances of their own, deposit, dehydrate, store, and leave in the honeycombs to ripen and mature. Honey consists essentially of different sugars predominantly glucose and fructose as well as other substances derived from the collection of nectar by honey bees for conversion into Honey. The color of Honey varies from nearly colorless to dark brown; the consistency can be fluid, viscous, or partly to entirely crystallized. The flavor and aroma vary but are derived from the plant origin.” – (USDA Article A-A-20380 – 6.1.1)

So by USDA definition, ‘honey’ derived from sugar syrup is not Honey. But, unfortunately, it does not stop there, nor is it that simple. A jar labeled Honey that was derived from overfeeding honey bees sugar syrup tastes like Honey – this is called “Indirect Adulteration.” Unless you are a Honey connoisseur, Honey with indirect adulteration is nearly indistinguishable from natural Honey. This is why it’s a worldwide issue.

The issues are many with indirect adulteration, as well as direct adulteration (the mixing on syrups after extraction and before bottling). The primary problem is that it’s not Honey, and it does not have the same health benefits as Honey.

This issue is compounded by some beekeepers (even small local ones) that unknowingly may be selling indirect adulterated Honey by overfeeding their honey bees sugar syrup. In responsible beekeeping, sugar syrup should be used sparingly and only when needed. From a health perspective, Honey is better than sugar syrup for both honey bees and humans.

Honey bees convert table sugar(sucrose) into glucose and fructose, but the Carbon in the sucrose bonds of cane sugar and nectar are different. Nectar is produced by the C3 cycle and cane sugar by the C4 cycle.

An article by Analytics Laboratories did a great job explaining the difference in these two sugar cycles: “There are three ways in nature that Carbon can be incorporated into plants through photosynthesis; two of these pathways are the Calvin cycle (also known as the C3 cycle) and Hatch-Slack cycle (the C4 cycle). Nectar is produced by plants using the C3 photosynthetic cycle while sugars like cane sugar (from sugar cane) and high fructose corn syrup (from maize) are produced using the C4 cycle. Carbon naturally exists as two different stable isotopes, which behave in the same way but have slightly different molecular weights. Carbon-12 (12C) is the most abundant in nature (98.89%); and Carbon-13 (13C) is far less common (1.1%) and is heavier than 12C. More 13C is incorporated into sugar produced in the C4 cycle, and this can be analysed by isotope ratio mass spectroscopy (IRMS).” – (source)

In an article published in the National Library of Medicine titled “The Toxic Impact of Honey Adulteration: A Review” mentions: “… adulteration increases the consumer’s blood sugar, which can cause diabetes, abdominal weight gain, and obesity, raise the level of blood lipids and can cause high blood pressure. The most common organ affected by honey adulterants is the liver followed by the kidney, heart, and brain, as shown in several in vivo research designs…”

That same article mentions: “…the syrup or sugar residues of some reported studies are identical to the natural residues in the Honey. Therefore, the detection of these adulterants have proved difficult, and scientists have to discover new methods to distinguish the differences between pure and adulterated Honey.”

So not only is adulterated Honey harmful, it’s also challenging to detect even with laboratory analysts. So will human taste buds notice the difference when they are eating adulterated Honey from a bottle labeled “Honey”? Not likely.

In another article discussing the effects of indirect Adulteration of Honey: “…supplementary feeding with sucrose and inverted sucrose syrup has been shown to affect the water and HMF content, diastase activity, free acidity and pH value of honeys (Ozcan et al., 2006). – (source)

So without making this article into a book, plain and straightforward, honey bees cannot convert sugar syrup into pure Honey. Still, the altered substance can have Honey like taste and consistency. But in all respects, adulterated Honey is unhealthy to humans and may have adverse health effects on the honey bees.

Adulterated Honey sold and labeled as Honey is not only unethical it is harmful, and it is undoubtedly not Honey.