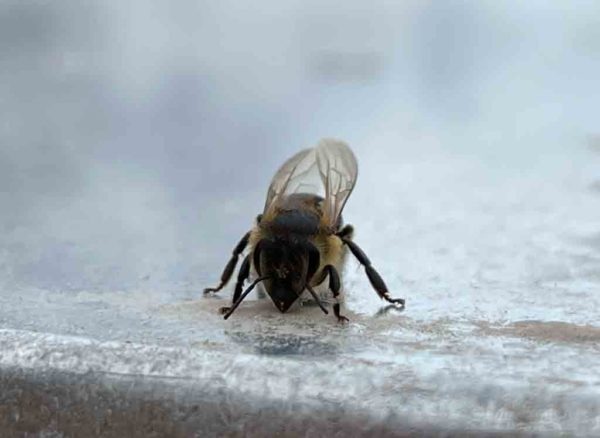 A honey bee’s survivability is essential whether you are a beekeeper or not. Since 2007, the average annual honey bee colony failure rate has been 30% in North America. (Death of the bee hive: understanding the failure of an insect society)

That was from a research paper in 2015. Bring this data to recent years. According to numbers provided by the Bee Informed Partnership for the 2020/2021 season for total loss calculation on average for the United States was 50.94%.

This surveys number was taken from the 39 states where there were more than ten beekeepers participating in the survey. 2,837 beekeepers participated in the survey, and the total loss includes the combined total off all their managed hives – which was 412,456. Even though this number only includes 15.2% of all the 2.71 million managed hives reported by the USDA from 2020. It provides an indication of hive loss for managed colonies. (bee informed partnership loss map)

Another article from the College of Agriculture looked at another angle of the same survey, factoring in the average loss that each beekeeper took, from all states, which was 45.5%. Bee Informed Partnership said this was the second-largest loss on record since 2006.(US beekeepers continue to report high loss rate, no clear progression toward improvement)

Whichever way you look at the numbers, it’s hard to miss that significant hive loss continues to escalate.

Now, these results and surveys show managed hives. What about feral colonies that remain largely untouched by humans? How are they doing? According to the research that we will consider, much better than managed hives.

In other words, if nature is doing better than us, we better stop and pay attention to what it is doing and why it is doing it.

It’s funny that the new tending honey bee is the MiteBitter. But that trait we first observed in feral colonies that were already adapting to manage the Varroa, and they were adapting much better and faster than managed colonies. So with natural selection, all Purdue is doing is isolating what nature has already done and is continuing to do. (Mite-biting behavior in feral swarms: The Pennsylvania Queen Improvement Project)

Now I am not here to sell you on Darwinian Beekeeping, as Tom Seeley calls it, or as I would call it “The Creators Beekpeeing.” Instead, we need to look at nature as close as possible and try to imitate the biology of what is working and try to mimic it into managed hives.

It’s not going to be precisely how nature is doing it; I mean, who wants to climb up a tree and reach in and grab some frames of honey? It’s not very practical for commercial operations or for pollination efforts for large monocultures. But we can see and learn what’s working in the natural world, follow the research, and adapt it to managed beekeeping. It’s what we as a company strive to do.

One research article that tried to identify the cause of colony loss wrote that other than non-specific factors such as climate changes or inadequate food, these losses in part are due to the following “…depriving bees of too much honey and a consecutive addition of large quantities of sugary food, inadequate treatments of colonies mainly against V. destructor, high stress and exhausting of bees, wintering colonies on honey contaminated with pesticides – sunflower honey, bad timing for wintering the colonies etc.” (Looking for the causes of and solution to the issue of honey bee colony loss) 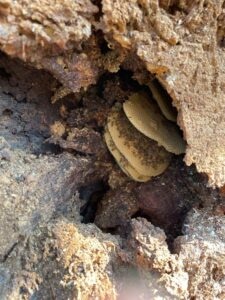 1 - Feral colonies, due to adaptation, have developed traits that increase their success against Varroa.

When honey bees are left to their own, they adapt to deal with the problem. If they don’t adapt, they die. So it is in their best interest to deal with the problem ahead of them. They have Varroa the same as managed hives, this is from robbing dying hives, most of the time managed ones, and the Varroa clinging to them during the robing. They also get Varroa from flowering visits.

The research noted on this subject, “…Mites are hypothesized to spread between most managed colonies via phoretically riding forager bees when they engage in robbing colonies or they drift between hives. However, widely spaced wild colonies show Varroa infestation despite limited opportunities for robbing and little or no drifting of bees between colonies. Both wild and managed colonies may also exchange mites via another mechanism that has received remarkably little attention or study: floral transmission…(Varroa destructor Mites can Nimbly Climb from Flowers onto Foraging Honey Bees)

So, Varroa is also on feral honey bees, so how have they faired. According to a study done in New York, it concludes, “it is now clear that a feral population of these bees, infested with V. destructor, persists in the Arnot Forest in New York State. Indeed, there as many, if not more, feral colonies living in this forest now as when they were censused 24 years earlier in 1978, hence long before the arrival of V. destructor (Visscher and Seeley, 1982)…” (Honey bees of the Arnot Forest: a population of feral colonies persisting with Varroa destructor in the northeastern United States)

Some think that since all feral honey bees at one time were swarms from managed hives (which is accurate, at least in North America). That all feral colonies are simply swarms and the assumption that they are ‘surviving’ is false. Even though that may be true from some. Research suggests that not fully accurate. Another research report found the following: “The population of wild honey bees did not go extinct. It is important to consider the possibility that the original population of colonies went extinct following the arrival of V. destructor in the study area, and that the current population exists because of immigration of colonies from beekeepers’ hives in the surrounding region. A recent microsatellite study of wild and managed honey bee colonies living near Ithaca, NY found strong genetic differences between them, suggesting that the wild population is not merely a sink for escaped domestic colonies…” (source)

Strong queens that have a natural resistance to Varroa and other diseases.

Purchase honey bee queens from queen breeders in your area, if possible, that focus on natural selection and vigorous testing for their queens. However, not all queen sellers are queen breeders.

A vital component to keeping colonies healthy is strong genetics. But as we will continue to learn from the feral honey bees – it is not the only component to consider. 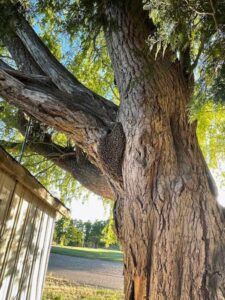 2 - Feral colonies are spaced much further apart than compared to managed colonies.

Now, this does not mean as beekeepers; we have to have one hive or two hives every mile. As one research showed, “In medieval Russia, for example, the honeybees inhabiting trees in the forests around the city of Nizhny Novgorod had a density of 1–2 colonies per km2 (Galton 1971)…” That again would not be realistic for managing honey bees, but what can we learn from the research on this?

One study said, “This study shows that the crowding of honeybee colonies in an apiary can boost the drifting of drones between colonies. It also suggests that this crowding can lead to healthy colonies suddenly acquiring lethal infestations of Varroa mites when other colonies in the same apiary are dying from high levels of Varroa mites and viruses…(Crowding honeybee colonies in apiaries can increase their vulnerabiltiy to the dealth ectoparasite Varroa destuctor)

How far apart are your colonies from one another? Moving a colony from 1 foot away to 5 feet away will decrease drifting dramatically. Essentially place your hives as far away as you can; that is reasonable. If you have two colonies in your backyard – placing colonies 15 feet or more apart from each other will make drifting less of an issue, and once you do that, place visible landmarks, put a rock near one, or have a flower garden near the other one. The more unique the placement, the less drifting there will be.

A study was conducted, and it concluded that small nests had a direct correlation to swarming, and the natural process of swarming leads to fewer mites. As beekeepers, the fact that feral colonies have smaller nests is important, but it slightly conflicts with our goals for pollination and perhaps honey production. But the key here is that a smaller hive produced more swarms and, therefore, an export of more mites.

Research done on the correlation between small hives and swarming said this: “Because a swarming event exports about 35% of a colony’s Varroa [18,19] and temporarily deprives Varroa of the pupal brood it needs for its reproduction [31], it seems likely that having a higher rate of swarming helps wild colonies limit their Varroa infestations and thereby survive and reproduce well enough to maintain a population of wild colonies in a region…” (How Honey Bee Colonies Survive in the Wild: Testing the Importance of Small Nests and Frequent Swarming)

Perform regular splits. Swarms can happen multiple times during the year. So you may need to split your hive 2-3 times a year. Depending on the growth and health of the colony. The goal here is not to create massive colonies – but large enough hives that produce excess honey—it is about managing swarms, not preventing them. A healthy hive will swarm, so splitting them beforehand will create another colony (or two or three) for you in a year).

It is not about ‘making more room for them’; in this case, splitting them or allowing them the swarm will benefit the colony’s health.

4 - Feral colonies use significant qualities of propolis in their hive.

We have talked about this before, which is why we add propolis groves in our hives.

The research is fairly detailed, that propolis is a key factor that benefits hive health. The bee lab at the University of Minnesota has done extensive research on the benefits of propolis.

The research is overwhelming in support of propolis. The feral and wild honey bees have done it for millions of years, and there is a clean scientific health benefit.

Make groves in all your boxes. We sell all our hive bodies with propolis groves, but if you already have a hive – just get the chisel out or even staple propolis traps inside your hives. Whatever method you choose, this is a very straightforward path to increase the health of your hive. 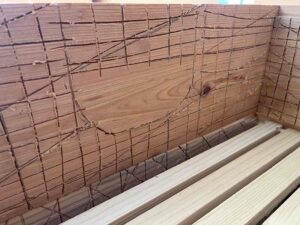 This article is not a complete picture of the separation between feral colonies and managed ones. So much more can be said about the subject, including the increased number of drones in feral hives compared to managed hives (see our article on The Drone). We can also talk about the type and the construction of the cells of the natural comb compared to the foundations that are used today. (see our article on Foundationless). The list can go on.

The point of this article is not to abandon ship and turn all managed hives into feral hives or to now stop treating your bees. But instead, to look at the biology of how feral honey bees live and use this information to adapt our colonies to match the natural biology of the honey bee. In addition, learning from the design of the honey bees will help us manage them in a better and more sustainable way.